I was fortunate to travel to Samoa from 18-23 January to support a number of new initiatives that have been identified by local Champagnat Marists. It was wonderful to witness the direct follow up from the Oceania Animators Course for Laity in Brisbane at the end of last year. Our Samoan participants at this course, Fou and Otilia, have responded to the need of ‘empowering local people to lead’ by looking at new ways to keep Marcellin’s Dream Alive and to work collaboratively for our mission.

A core Champagnat Marist team has been formed consisting of Silila Bell (chair), Fou Laulu, Otilia Pesamino, Pesamino Feo and Br John Hazelman. The core team oversees planning and preparation to meet the local formation needs via gatherings and workshops throughout the year. 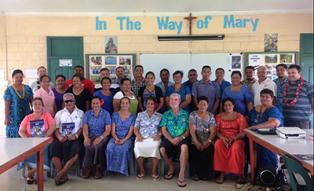 The first key task for the core team in 2016 was bringing together the staff from Marist Brothers Primary School, Mulivai and St Joseph’s College, Alafua for a charism development workshop over two days. This was the first time the two schools have come together for shared input at the beginning of the year along with a shared focus pillar – In the Way of Mary. Fa’afetai lava to Kalala Samuelu (Acting Principal, Marist Brothers Primary) and Br David Lavin (Principal, St Joseph’s College) for supporting this new initiative.

An open invitation to all members of the wider Champagnat Marist community was presented by Br John Hazelman in the Samoan Observer newspaper and a good number of attendees turned up to the Old Boys Lounge at Alafua on Wednesday 20 January to share in the future of partnership in Samoa. This was also an opportunity to share our Marist Institute’s ‘Road Map’ for a new dawn of the Marist Mission and to localise two specific paths to our future:

An opportunity to share in dialogue followed by food and refreshments made for an enjoyable gathering. The evening concluded with an invitation from Fou Laulu to ‘come and see’ at future Champagnat Marist monthly gatherings.

The inaugural meeting took place at the Brothers Community house in Mulivai on Saturday 23 January. Group members included teachers, brothers and old boys (including Brian Roughan, a Marist Brothers Old Boy from Xavier College, Christchurch). During this time all group members had the opportunity to share their personal link to our Marist story in Samoa and beyond – a time of laughter and tears as group members shared so openly. A shared morning tea was held at the conclusion of our time together. Future monthly gatherings will be a time of sharing in prayer, scripture and Marist spirituality along with an outreach focus aligned with one of our pillars - an opportunity to grow together as Champagnat Marists.